The first year of high school was a big adjustment for us.  We had to get used to a variety of teachers and teaching styles.  Learning a new language was fun, but also very difficult.  We had to memorize lots of English words, their difficult pronunciations   and their idiosyncratic spellings.  To this day, the infamous “th” is still a challenge for me sometimes.   Spelling rules are fairly consistent in German but in English exceptions to the rule are common place.  Memorization of words and phrases seemed to be the best solution.

Although school ended at 1:15 p.m. we had very little free time because of heavy loads of homework for each subject.  In the afternoon, my brother and I would sit at our only table in the small room of the “House of Rocky Docky”  and study.   His homework was completely different from mine. We hardly talked to each other each of us immersed in a different world.  My father was at work in the Krupp dental laboratory and would not return until supper time.  My mother had her own battles to fight.  She was  constantly on the go trying to fight for my father’s right to receive a  government pension from the police force he had worked  for until Germany was divided.

Most people in Germany did not have phone service when I grew up.  This made it difficult for my mother to talk to government officials and other important contact persons involved in her struggle to get justice for my father.  It was a difficult and stressful undertaking for my mother and very exhausting. She had to travel by bus or train to government offices in other cities trying to get an appointment.  She had to write letters and fill out long forms which often landed in the wrong departments or were filed away unread. There was an overload of administrative work for the government officials to accommodate  all the  refugee claims from the east.

Often she was at the point of exhaustion and desperation to give up. The bureaucracy was so overwhelming that all her efforts seemed futile.   But my mother’s tenacity and indefatigable spirit finally paid off. After seven years. as a last desperate effort,  she went to the highest government department to plead for justice. Miraculously,  she was received by a representative of the German Chancellor Adenauer who had a sympathetic ear and in no time  got the “ball” rolling.  My father finally was entitled to a sizable pension and a big back pay for the lost years.  My mother had won the struggle for financial security at the expense of her health and vitality. The years of  worries and deprivations had taken their toll.  But my brother and I were too young and self-absorbed to notice.  For us she remained  a pillar of strength and comfort.  Her love for us was inexhaustible.

After this memory fragment of my mother  back to my life. Shortly after our second year of high school had started “Mecki” our home room teacher introduced a new student. He assigned her to sit beside me since I had lost my desk partner from the previous year.  She had failed the grade.

I glanced furtively at my new companion who looked straight ahead at Mecki.  Angelika had a cute snub-nose and big blue eyes with long dark eyelashes. Her short hair curled softly around her round red cheeks.  She had a nicely curved mouth and dimples.  When she eventually dared to smile at me, she looked very beautiful. 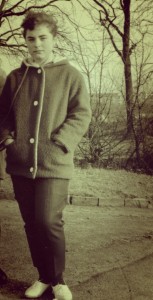 It didn’t take us long to overcome our initial shyness and we started to get to know each other during recess.  Towards the end of the week.  Angelika asked if I would be allowed to visit her on the last day of the school week.  We could walk together to her place and her dad would drive me home at night.

My parents had no objections and on Saturday after early dismissal we walked together to her home.  It was a fairly long walk to an unfamiliar part of town.  There were lots of trees and beautiful yards.  In Germany, most people do not own houses but live in apartments.  Angelika stopped in front of a big cast iron gate and opened it with a key.  We walked through a long garden path to a big house with lots of windows.  A young slender lady opened the front door.  She had raven black hair and pale blue eyes.  With a gentle smile she kissed Angelika on the cheek and then shook my hand in greeting.  I hadn’t expected Angelika’s mother to look so young.  She served us some delicious little pastries in a bright sun room. The delicate cakes looked like the ones I had longingly admired in the window of the fancy pastry shop in town,  Finally I had a taste of these small fruit tarts covered with strawberries and topped with whipped cream.

Frau Janzen asked me a lot of questions about my family, my interests and hobbies and about school.   She had a gentle voice and kind eyes. After our refreshments she showed me all the rooms in the beautiful house and I was reminded of our big, wonderful home in Gotha, which we had lost.  Our room at the Old House  where we lived  now was about the size of this sun room.

Angelika’s bedroom was very large and so bright and colourful.  She even had a piano in the middle of the room and her mom made her play me some tunes. Then she left us alone and we spent some time in the park like yard playing badminton on the lawn.  We had fun and laughed a lot.  Later we sat on her bed talking about school and joking about our teachers.

Suddenly I heard barking and a male voice.  Angelika’s dad who was the manager of the municipal hydro corporation had returned from his office with their German shepherd dog called Torro.  Angelika and Torro greeted each other exuberantly.  Angelika’s dad looked on with a big boyish smile on his face.   Then he turned to me.

“You must be that special girl I have heard so much about “,, he said.   “Don’t be afraid of Torro he is very gentle and would never hurt anyone.  Come and pet him so he gets to know you.”  Overcoming my fear I managed to stroke Torro gently on the back, which he seemed to like.  He sat down in front of me staring at my face  obviously expecting more attention.  Angelika’s dad looked very easygoing and friendly.  He laughed a lot and made me feel at ease. 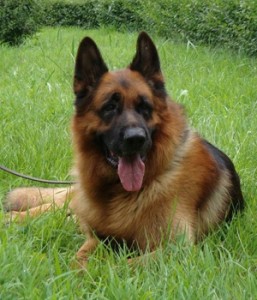 I will talk more about Angelika and her family in my next post.