The theme of my blog is this miraculous life. Like life, I don’t know where my blog is leading me, but I know I will be talking a lot about miracles and wonders.

Today is a dark,  dreary November day.   I am suffering from a cold  which prevents me from walking my  regular 10 000  Flex steps and  rake up the last leaves from our enormous nut trees.   But there is a small silver lining.  I have some time to continue the  post on my new blog.

I want to tell  you about the first miracle in my life.   I was born in Germany,  a few months before the end of  World War II.   While every new life on this planet is a miracle, the birth of my twin brother and me was even more miraculous.    My mom had been told by doctors after the birth of my half sister  that she could have no more children.   For twenty years my sister was the only child.  My  mom was 43 years old and thinking she was in her menopause when she found out that she was pregnant with twins.

On the last Sunday of October I entered the world fifteen minutes before my twin brother.   A retired, old doctor who was exempt from war duties, my awestruck sister and a full moon casting a soft light in the candle lit bedroom witnessed our birth.

My father, a reserve  police officer,  was stationed in Croatia at the time.  The next day the police department  notified  him by a telegram of the joyous event.

His comrades designed and drew a beautiful card to congratulate him on his “master shot”,   a suggestive play on words in the German  language. 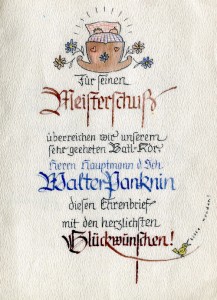 It wasn’t until early January 1945 that my dad was finally able to hold us in his arms for the first time.   We rewarded him with brilliant smiles.

My dad’s leave from the Balkan countries to meet his new family  miraculously saved his life.  While he was home  getting to know us, the German troops in Yugoslavia were completely cut off from the homeland.  When his leave was over,  my father could no longer return to his battalion.    Most of his unfortunate comrades who had stayed behind were killed.   He would very likely have endured the same fate. 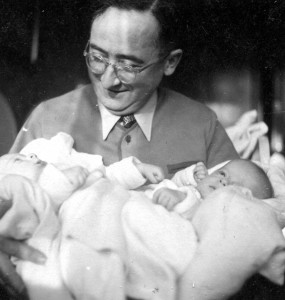 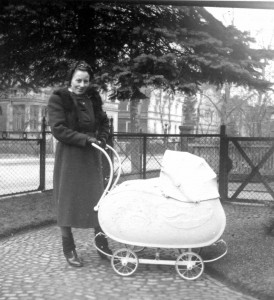 Today is Remembrance Day.  With countless others all over the globe I remember the sacrifices of the brave young soldiers who fought and died for our freedom and welfare in the two world wars and other wars of our time.   And I remember all the brave families who had to let their loved ones go.

I dare not imagine the agonies I would have felt if my brother, my husband, any of our five sons or our grandson, or even our two granddaughters had to fight in the war.  UNIMAGINABLE!!!

Today I want to write about my parents who lived through the two world wars and suffered through the devastating years before andafter these wars, especially World War II.My  mother was born in the spring of 1901.  She had three younger brothers.  Two younger sisters had not survived long after birth.    My  mom’s parents loved each other and their four surviving children dearly.   They were a close knit, happy family.   When my mom was eleven years old another child was on the way.   Everyone anticipated the birth with great excitement.

Then, one day in early summer when my mom returned home from school she was told that her mother and newborn sister had died in childbirth.

Her dad never recovered from this great tragedy and loss of his beloved wife.  Three years later he also died.

My mother was sent to a convent school by her guardian aunt and her brothers to a foster home.  I don’t have many details because my mom rarely talked about her past.

Born in the Rhineland region of Germany, my mom incorporated all the positive qualities attributed to a typical Rhineland personality.   She was always cheerful and full of vitality.  She loved life and above all people. Her keen sense of justice and fairness combined with an indefatigable fighting spirit.  Her memory was astounding.  She could recall events and people of the past in minute detail.  She was very resourceful and overcame many insurmountable obstacles.   She always fought for freedom in all its forms. 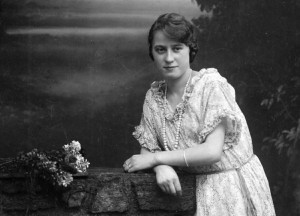 People would gravitate towards her; even complete strangers would love her almost at first sight.  Sometimes my brother and I were a bit embarrassed by the attention strangers gave her when we traveled with her.

Her hospitality was famous and all our friends loved to visit our home.  She took a genuine interest in other people.   She had good advice and people accepted it with gratitude.

She was also beautiful.   After she left the convent school, she found employment as a receptionist for a popular photo studio and frequently sat as a model for her employer.

My half sister was born when my mom was 23 years old.  My mother never talked about that time and the identity of my sister’s father has remained a mystery to this day.   My nephews are still searching to find out who their grandfather was.  Until I was 20 years old I did not even know that my father had adopted my sister.   My parent’s generation kept a lot of secrets.

There are some indications that my sister’s father was not acceptable to my mother’s strict catholic guardians.   Very likely he was a Jew.  I remember a rare moment when my mother told me that she was once given a beautiful necklace by a Jewish man who loved her very much but died in a motorcycle accident. At that time I did not know that my sister had a different father.   Looking back now there is the possibility that my mother wanted to force the marriage by her pregnancy. Tragically, her lover died in a fateful accident, before my sister was born.  This is speculation.

How my mother coped as a single parent and how she eventually met my father I do not know either.   I only can presume that my father must have loved her very much to overcome the social barriers of that time to marry an unwed mother and thus jeopardize his status as police officer. 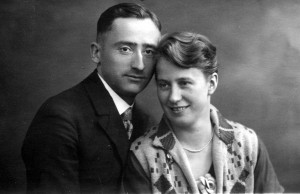 My father was born 1898 in West Prussia,  Germany where his dad owned a construction business.  His mom was a lot younger than his dad. I inherited her name Gertrud.  My father had an older brother and a younger sister.   His dad died when he was 17 years old.   Shortly after  this great loss, my father enlisted as a soldier at the western front in World War I.

He suffered from shell shock which triggered a nervous condition from which he never completely recovered all his life.

After the war,  he apprenticed as a dental technician and worked in that profession for several years.    In his mid twenties he entered the police force and moved to Westphalia where he eventually met my mother.

Early on in his career he had an accident returning home from duty on his bike.  He fell on his revolver which went off and shot a bullet  through his kidney.  He lost his kidney but miraculously his life was spared.

My dad did not have the outgoing, cheerful personality of my mom.  Although he could be humorous  and enjoy company, he was more introvert and loved to read, study and write.  History was his passion.

But he also was an outdoor enthusiast and loved to hike, bike, ski. swim, go camping and boating in his canoe like paddle boat.  My mom and dad explored all the major rivers of Germany by embarking on extensive boating and camping trips in the summer.

Until late in his life my dad led hiking clubs.  He loved  exploring  and marking new trails.  He also loved collecting mushrooms and became an expert in that field researching new species and cataloging them

He also liked to compose poetry, especially ballads which he would  illustrate with beautiful ink drawings.  The only thing he lacked were practical skills.  According to my mom he could not even “cook  water.”  While my mom was loved, my dad was respected.