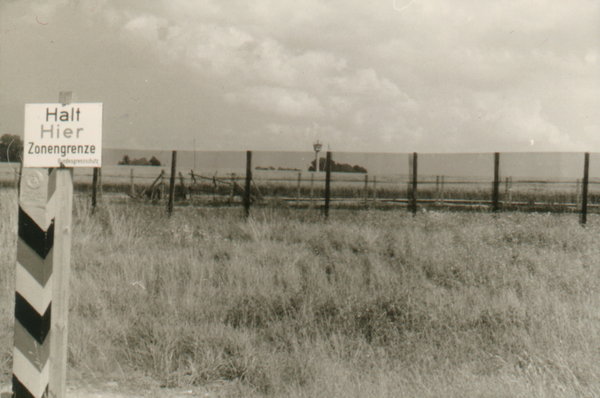 While my parents increasingly suffered under the oppressive political system,  my brother and I experienced a happy childhood. We were oblivious to the hardships my parents had to endure.  My mother had to struggle every day to provide food and other necessities for us.

Even basic food items such as butter, flour, sugar, meat and cheese were scarce  and there were long line ups at the grocery stores every day for the limited supplies.  Luxury items such as coffee, cocoa, chocolate, citrus fruit  and cigarettes were hardly ever available.  Ironically, the most coveted items for many people  were cigarettes and coffee.

Not only food was scarce but basically everything from clothing to building materials was in short supply or unavailable. Even electric power was rationed by regular planned outages.   While West Germany had a rapid economic boom after the war,  East Germany had an economic decline.

People in the East were angry and upset  that they had to struggle for survival under a totalitarian system while their brothers and sisters in the West were enjoying freedom and prosperity.  If people complained or criticized the system, they could be “denounced” to the authorities and severely punished.  People could no longer trust each other.

For many demoralized  people in the East, West Germany became the “Promised Land” and they  started calling it the Golden West.  Great numbers of  desperate people escaped to the West risking their lives and giving up all their material possessions in the pursuit of freedom and happiness.

There wasn’t much that West German people could do to help their friends and relatives across the border.  On occasion, West Germans were granted permission to visit their relatives, if their application was approved by the GDR officials.  People from the West often feared that they would  arbitrarily be detained and would not be able to return home after a visit. For a while the only way  to stay in contact was by mail.

To share some of their newly acquired wealth, West German people would send parcels with precious items to relatives and friends  At Christmas time we received big gift packages from my mother’s relatives.  There were delicious sweets. chocolates,  beautiful toys, well made  stylish clothes and shoes for us.    Fragrant  “real”  coffee  beans for my mom and aromatic cigars for my father were some of the desired luxury  items, which you could not get in the East.   My brother and I were fortunate that we always had comfortable and well made shoes, because of my mother’s relatives who owned big footwear companies in the West.

Books and other printed materials were forbidden, because they could contain “propaganda” against the political system.  Letters and parcels often were confiscated if they looked “suspicious”.   My mom tried to keep up a good relationship with the mail man so her letters and parcels would not get “lost”.

In my imagination,  the Golden West was a fairy tale kind of land where all the houses had golden roofs like  the castles and palaces I had seen in the movie theater. My father’s friend owned the “White Wall” movie theater close to our home.   On many a Sunday my dad took us there to watch Russian fairytale cartoons and  other movies.  Since I had no concept of the “Golden West” I thought it was a beautiful place in fairyland where you lived  “happily ever after.”

My parents protected and shielded us from their increasing  hardships and sorrows    We had lots of friends and were allowed to play in our quiet neighborhood without many restrictions.  After the war, only few people could afford cars. There was hardly any traffic. Most people traveled by bike, street car, train or horse buggy.  Special forest trams would take us out into the beautiful surroundings for hiking or other outdoor activities.  On weekends my mom prepared a simple picnic lunch and we would either go by tram or on the back seat of my parents’ bikes out into the forests.

It’s amazing how far we could hike at an early age.  My dad would goad us on by promising a pop like beverage if we made it to the next village or any other destination he wanted to reach. Picking berries or mushrooms would supplement our diet.  However,  at that time I fiercely hated mushrooms.

Located in close walking distance to our home was a public outdoor swimming pool in a beautiful forest setting. My  father was a passionate swimmer and he taught us to swim before we even entered school. I inherited my dad’s passion and went  to the pool every day during the  open season  no matter how cold the water was.  Even before I was six years old i was allowed to go there on my own without adult supervision,

In the winter, we would get lots of snow.  Every day we would spend hours tobogganing with friends down a steep street in our neighborhood.  At suppertime we would trudge home tired  but  with glowing cheeks  looking forward to our big warm  tile stove and my dad’s nightly stories about the great explorers and inventor of the world. 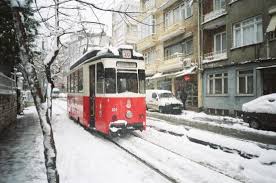 It was on such a day in January 1953 that our life changed forever.  It had been clear and cold.  Our tobogganing hill was slick and fast.  Many of our friends were out and we raced down the steep street again and again.  One of my friends wore a new fur trimmed hat which I liked very much.  It was so much prettier than my hand knit wool tuque.  She had just received it it in a belated Christmas parcel from her aunt in the West. She also shared some chewing gum with us, which we  never had before  and enjoyed tremendously for the first time in our life.  What a wonderful place the West must be, I thought to myself, when I looked at my  friend with the pretty hat trying to blow bubbles with her bubble gum.

It started to snow softly when suddenly  I saw my mom approaching us. She never called us home before supper. Puzzled we ran to her. Taking hold of my brother with one hand and of me with the other, she told us that we had to go quickly to town with her before an important office closed.  In spite of our protests demanding to stay with our friends she pulled us hurriedly along.  I started whining, demanding that she at least buy me a new hat as pretty as the one my friend had received from the West.  Without responding to my increasingly vocal demands my mother pulled us relentlessly along.

Eventually  we reached the office.  She signed and received some papers.  It was pitch dark when we headed home.  i was very tired and hungry by then and had given up whining.    Suddenly i heard my mom whisper to me that i would soon get a new hat in the West.  I was too drowsy to understand what her words meant.

Finally at home, we hastily ate some hot cabbage soup.  After supper, instead of getting us ready for bed time,  my mother made us change into some warm good clothes.  Without explanation she made us kiss our dad good-bye and then grabbing a big suitcase from a closet  in the hallway whisked us out of the front door.  When we stepped out on the snow-covered sidewalk faintly illuminated by occasional street lights my mother whispered to us that we would have to go on a long walk but there would be a surprise in the end.  We walked silently like in a dream world enveloped by the thickly falling snow.  Tired and dazed we walked for a long time until we finally reached the railway station. 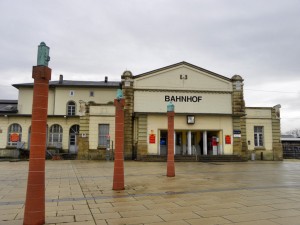 Once we were settled in an empty train compartment my mother told us that she had received permission to visit her sick guardian aunt in the West.  My dad had  to stay back as a guarantor for our return.  If we did not come back, he would be severely punished.

My brother immediately fell asleep in my mother’s arm when the train started rolling.  I, however, had my face pressed against the cold dark window.  I did not want to miss the first glimpse of the “Golden West” once we crossed the border. 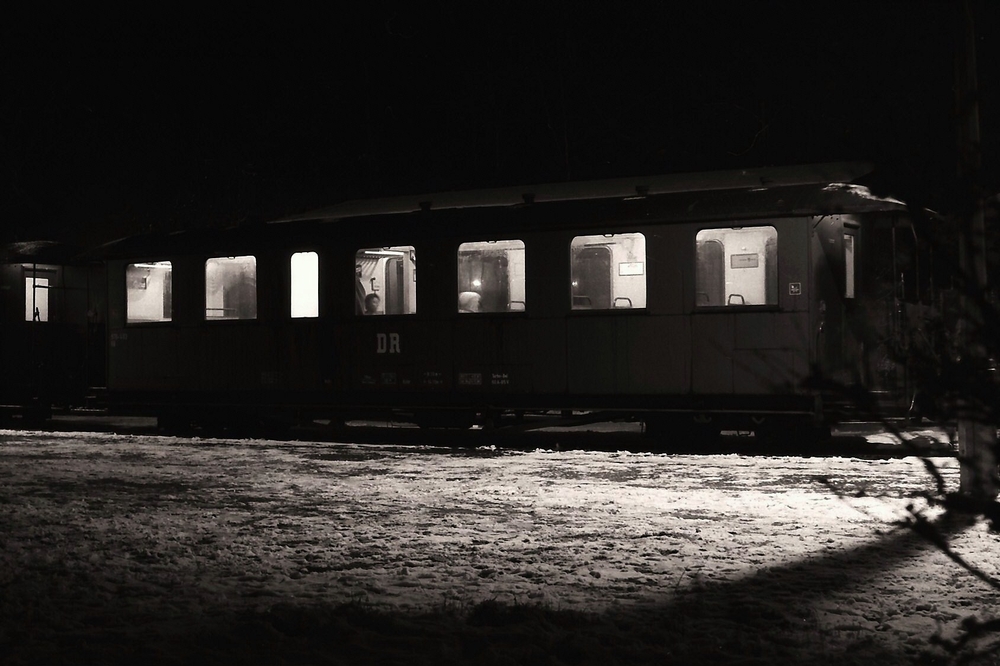