Dear friends,   after my last post talking about Stefan’s attempt at making the famous traditional Thüringer Klösse   (raw potato dumplings) for  Christmas eve, I received an email from a friend in Germany.   He voiced his extreme displeasure that I told him that our son tried to make Knödel.  Now I have to explain that in Germany there are many words for dumplings and I thought they were all interchangable.  Not so!  I found out.

I have talked about my friend Peter before in an earlier post.  He is from Thuringia and was born at the same time and place as my twin brother and I in my home town  Gotha.   There is a strong connection. He is the one who did the  “research” on the mysterious “Mrs. Goose”, my first teacher. Look in my archives for that post.

Peter is not only a proud citizen of Thuringia but also a master “Dumpling” chef.  He has a very old recipe which dates back many generations and is the treasured  secret of his family. I feel extremely honored that he shared this precious recipe with me.

Now I have to admit that in my childhood growing up in the “hotpot region” of Thüringer Klösse I was not very fond of these enormous potato dumplings. They were swimming in a rich gravy often paired with sweet and sour braised red cabbage and fatty goose meat.  I was an extremely picky eater and could not stand the smell and sight of such rich dishes.  I remember my mom and sister grating enormous amounts of potatoes and working feverishly and nervously  over the hot stove to make sure that  these dumplings would be a success. Christmas would be ruined if the dumplings , oh no I mean Klösse, did not turn out to perfection.

I have to  further admit that when my husband and I started our own household in Canada I left this “Dumpling” or “Kloss” tradition happily behind.  I never ate a Thuringer kloss for many years until exactly twenty-five years ago.  That’s when I met Peter,  the Klossmaster (not Peter, my husband who does not care for any dumplings or Knödel whatsoever.  He does not even know the differences between them.)  But I’ll get to that point soon.

Peter, the “Klossmaster”,  as I will call him now.  was visiting Richard E., his long time pen pal for the first time after the Berlin Wall came down. Since traveling from East Germany  to the western hemisphere was finally allowed  Peter and Edelgard decided to meet their friend across the ocean in person.

Peter and his wife Edelgard came to Canada to celebrate their 25th wedding anniversary with Richard E.,  our friend from nearby Apple Grove.  We were invited to the party. Richard at that time lived on his beautiful property off the land  (hippie) without electricity and other modern commodities.  His idyllic setting and beautiful productive garden made up for many things. I still remember the beautiful hand woven baskets of freshly picked, sweet smelling strawberries  sitting on the rustic wooden table under the apple tree. 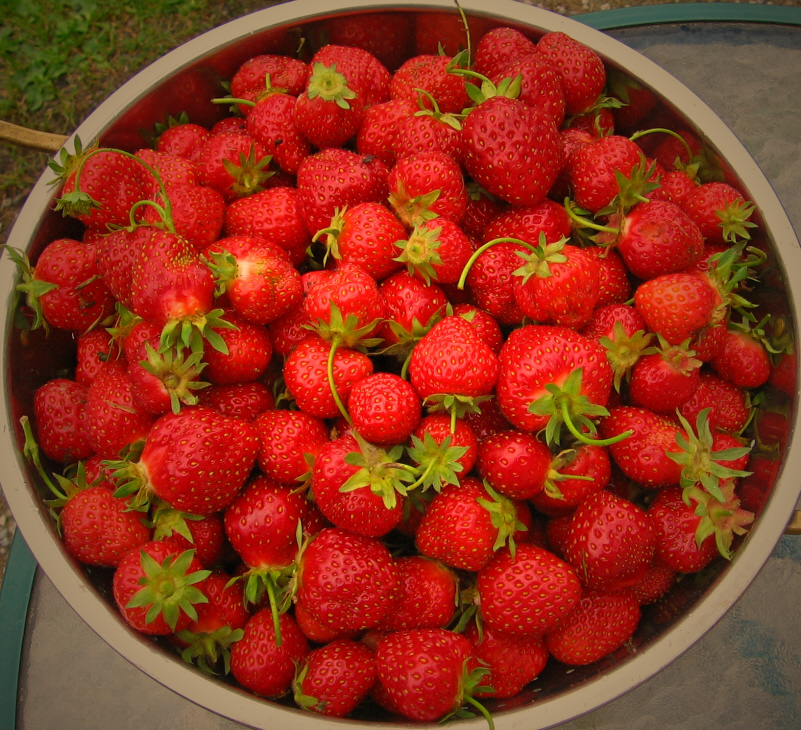 There  were a variety of delicious dishes the guest had brought. The spirits were high.  We did a lot of singing, laughing and teasing Peter and Edelgard who were trying to renew their wedding vows.

Peter was very excited and overjoyed when he learned that we were both born at almost the same time and same place. Such a miraculous coincidence!  He couldn’t get over it.

When Peter and Edelgard finally had renewed their wedding vows after long humorous negotiations and tense moments when Peter threatened to drown himself in the beautiful sauna pond, the guests started to leave. 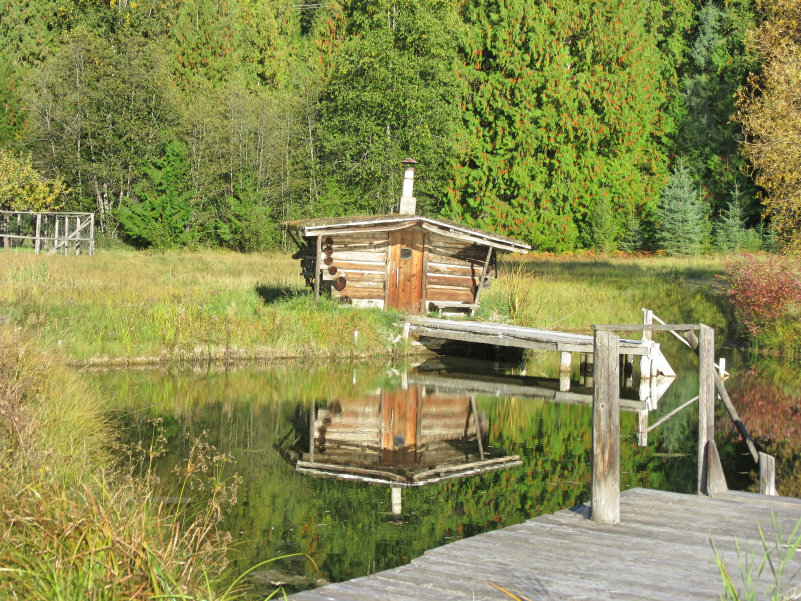 Ready to say our good-byes to the newly rewed pair, Peter held us back excitedly.  “You cannot leave until you have tasted my Thüringer Klösse.  They are the crowning conclusion of this wonderful day,”  We couldn’t decline.  Peter led us to Richard’s rustic log house which seemed to belong to another time in the long past.  In the dim candle light Peter dished out two enormous, perfectly round and fluffy white Klösse (dumplings).  He ladled a generous amount of glistening and shiny gravy over these balls and lots of tender meat. He waited eagerly for our approval. When we finally managed to express our appreciation of this delicious food in between big  mouthfuls of  dumplings he told us how he managed to make them that day in spite of major obstacles.

Richard at that time (before Margret) lived mostly from fresh produce from his garden and rarely wasted his time with cooking.  He had a small propane camp stove for these eventualities. The big and beautiful antique wood stoves were only used in the winter. 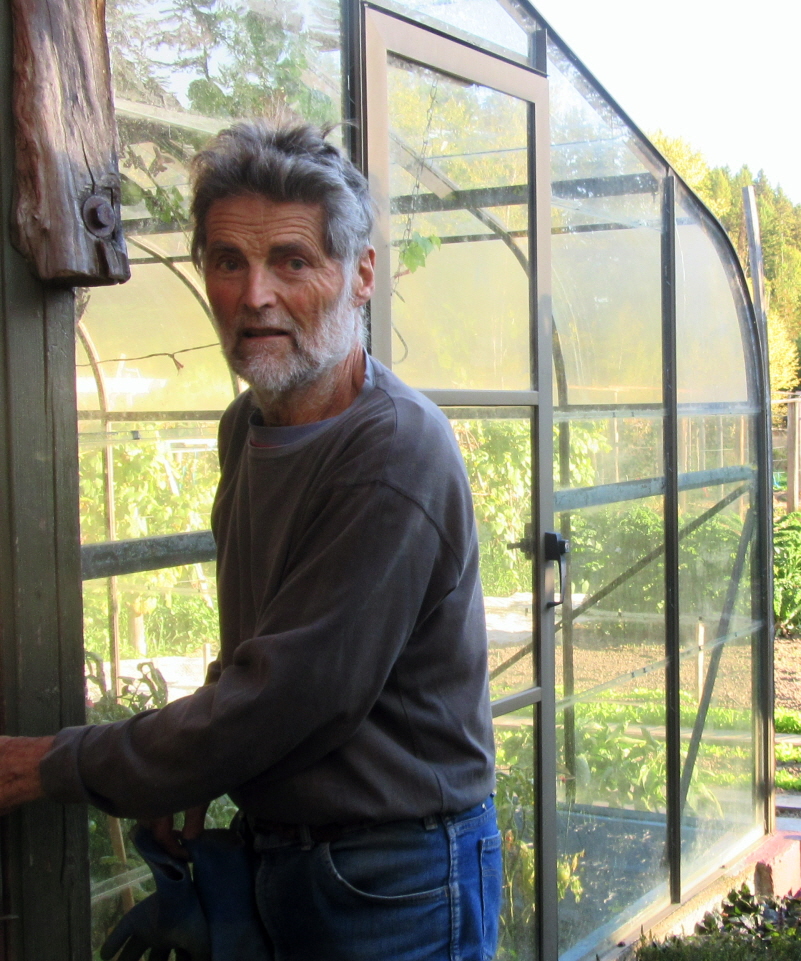 Early in the morning, when Peter was ready to start the arduous process of  his Thüringer Klösse preparations he experienced an unwelcome delay.  Although Richard prided himself with the freshest produce from his garden almost all year round his last year’s  potatoes in the late spring were no longer of top quality.  Peter was almost in tears when he looked at the shriveled and sprouting specimens.  In spite of Richard’s protests and risking to insult his host, he jumped into the car and raced to Nakusp,  a 45 minute drive  at normal speed, to buy the best quality potatoes he could find. The end result of all his efforts was a culinary delight and changed my taste. I finally enjoyed the iconic dish of my birth place.

I never tried to duplicate his efforts though and went for many years without tasting them again until my nephews from Thüringia came for a visit and successfully prepared them for us paired with a turkey dinner and gravy,  a delicious German Canadian combination.

Almost 25 years after Peter’s visit our youngest son Stefan tried to go back to his”roots” and to try his hand at making these Klösse on Christmas Eve with the help of our big brother Google.  With passion and enthusiasm and lots of youthful vigor he set out for this daunting task. 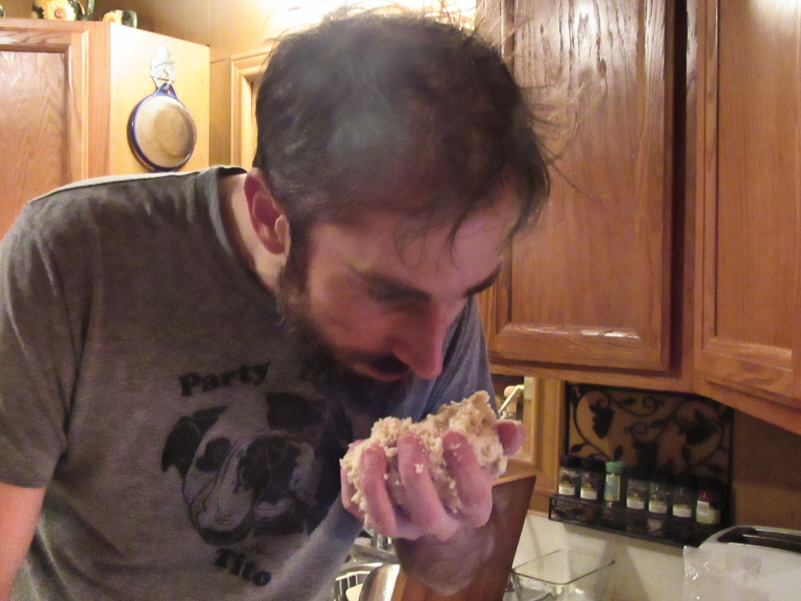 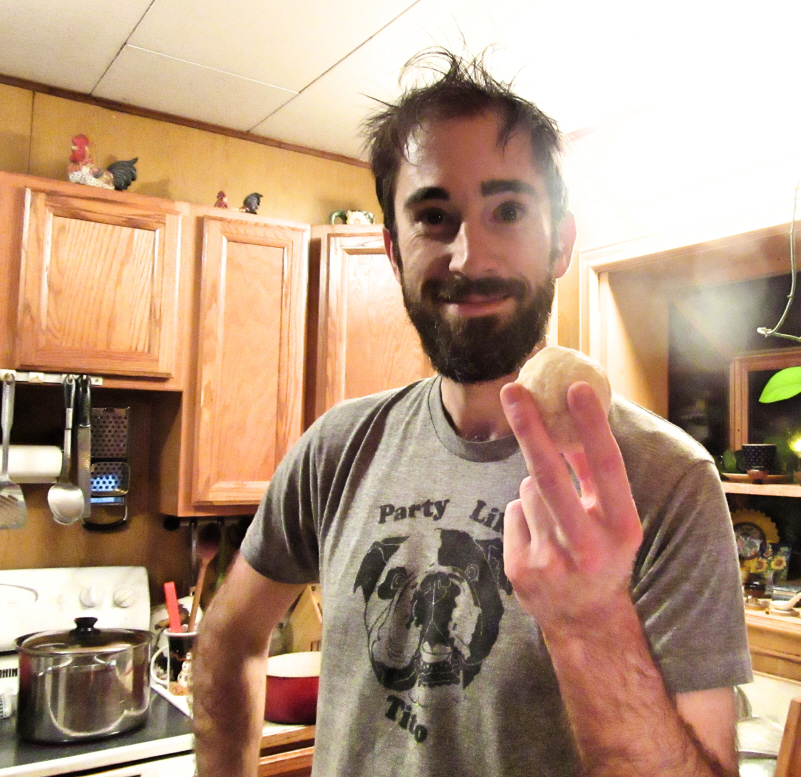 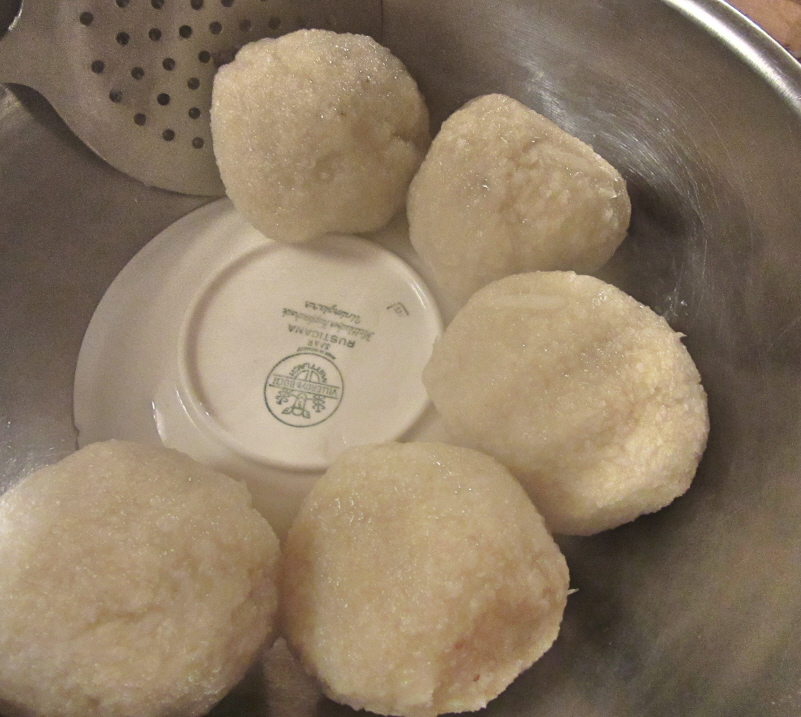 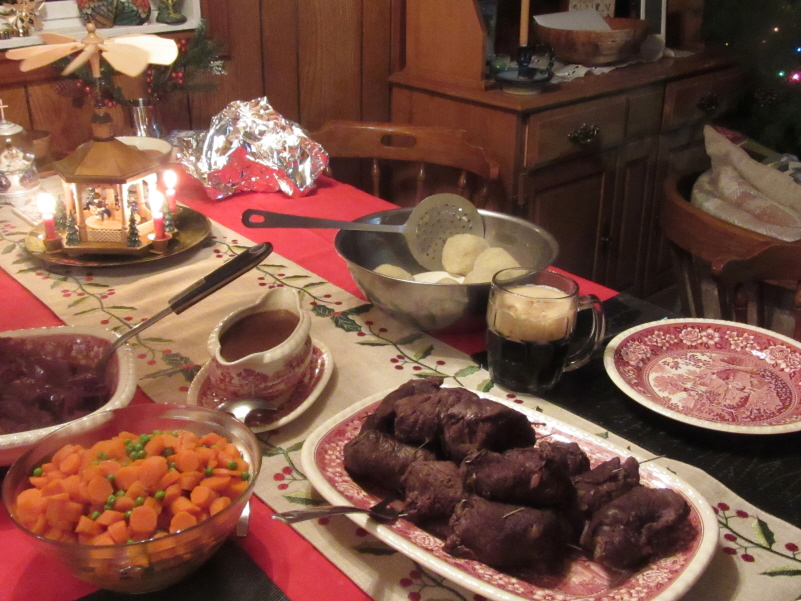 I won’t go into detail but he was moderately successful.  A great accomplishment for the first attempt.  Although they were not perfect, we enjoyed our dinner. The absolutely well seasoned gravy covered the imperfections.  Stefan’s meal was delicious. A few days ago Peter sent me an email showing off his master pieces and reminding me that it is a grave insult to all the people and Klösse makers from Thuringia to call these  famous specialties Knödel, which is another German word for dumplings.  Luckily in English the word dumpling covers them all. 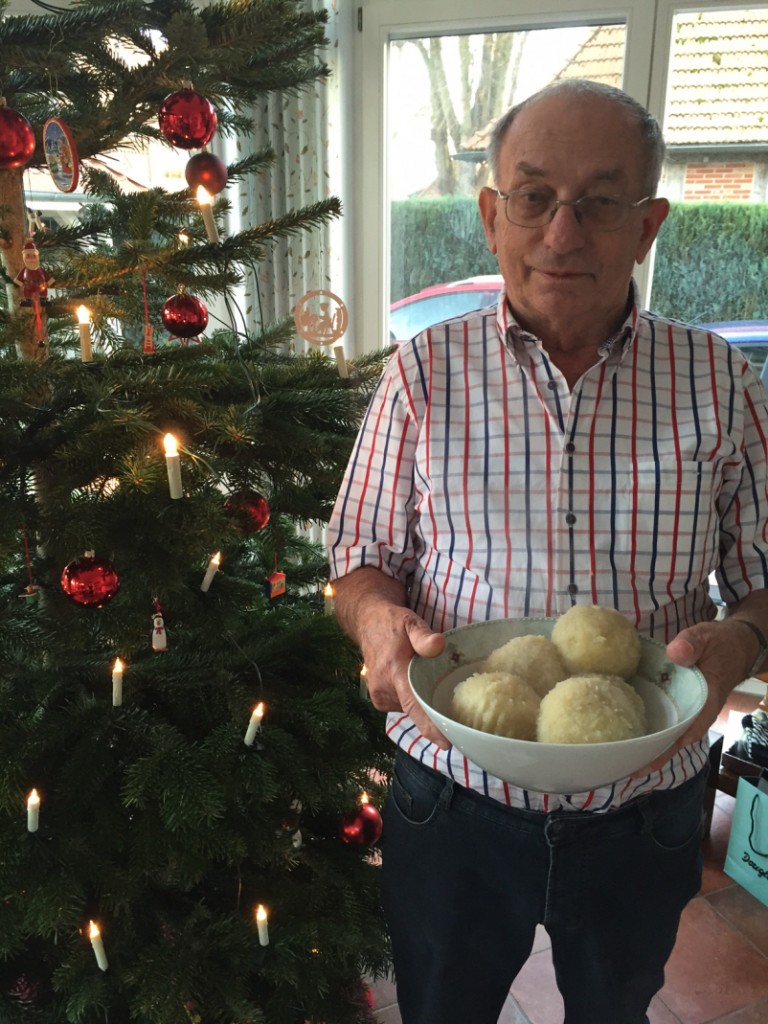 Peter sent me his secret family recipe again and I promised myself to try and make them on the next special occasion.  I’ll let you know if I succeed.

Have a successful and happy New Year.