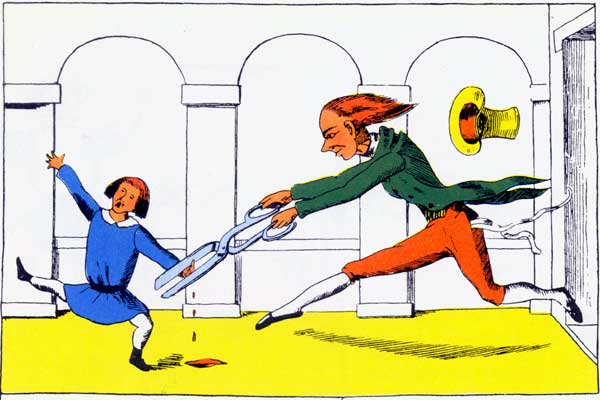 ‘The door flew open, in he ran,
The great, long, red-legged scissor-man.
Oh! children, see! the tailor’s come
And caught out little Suck-a-Thumb.
Snip! Snap! Snip! the scissors go;
And Conrad cries out “Oh! Oh! Oh!”
Snip! Snap! Snip! They go so fast,
That both his thumbs are off at last.’

Right from birth and maybe even before I sucked my thumb with passion and abandon.

My parents never got tired of telling the embarrassing story when I tried to suck my brother’s thumb.   He often stood still  when observing something with his hands folded on his back like a little statesman.  I was playing on the floor behind him when I suddenly grabbed his hand and tried to put his thumb into my mouth.   He screamed in horror thinking I was going to bite him.

Initially my parents thought that  I would eventually give up this bad habit on my own.   But when I still continued  past the toddler stage, they started to get worried.   All their attempts to stop me from putting my thumb into my mouth failed. As soon as their attention was diverted, I made up for lost time especially at night. 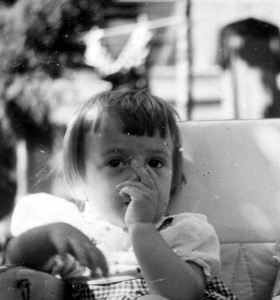 Finally my mother and sister  decided on more drastic measures.

They  read the then bestselling children’s book ‘Struwwelpeter’ by  Heinrich Hoffman to me.  I listened attentively sucking my thumb peacefully when suddenly my ears pricked up.   There was a story of a little boy who like me had this habit of thumb sucking.  Like me the boy did not stop when told so by his parents.  Then one day the thumb cutter came and cut of his thumbs. Thus he stopped him once and for all.

I was getting a bit worried hearing the story, when suddenly the door bell rang.  My sister got up to answer it.  She returned after a few minutes looking very serious.  “The thumb cutter is here looking for Biene”, she told my mom.  “Should I let him come in?”   My mom replied looking at me, “Tell him to go because Biene will not suck her thumb anymore.”   My thumb was out of my mouth in an instant.  I was shaken to  the core.   “Miraculously”  from that day on I stopped this bad habit for good

Another child rearing practice my parents  employed is also of dubious nature.

My parents’ generation stood under the influence of the naturopathic  medicine movement of Sebastian Kneipp who believed in the therapeutic  power of cold water.

My parents wanted us to grow up strong and healthy. Every Saturday my brother and I  had our weekly bath in a big zinc tub placed on two chairs in our spacious kitchen.  A  hot bath was a luxury at that time.   We enjoyed this rare pleasure tremendously.  But all pleasures come to an end and for us it was very abrupt.  Without warning my mother would dump a bucket full of cold water which she had hidden under the chairs over us as suggested by Sebastian Kneipp.

This “shock therapy”  was supposed to toughen and strengthen us.  Before we could utter desperate cries of protest, we were wrapped in warm towels.  Time and again my mother would assure us that she would not do it again.  But she never kept her promise and was very skillful in hiding the bucket of  frigid water.

Until the end of his life my brother detested cold water.

I on the other hand started to like this invigorating procedure.   To this day I love swimming in cold lakes and conclude my warm bath with a cold shower. 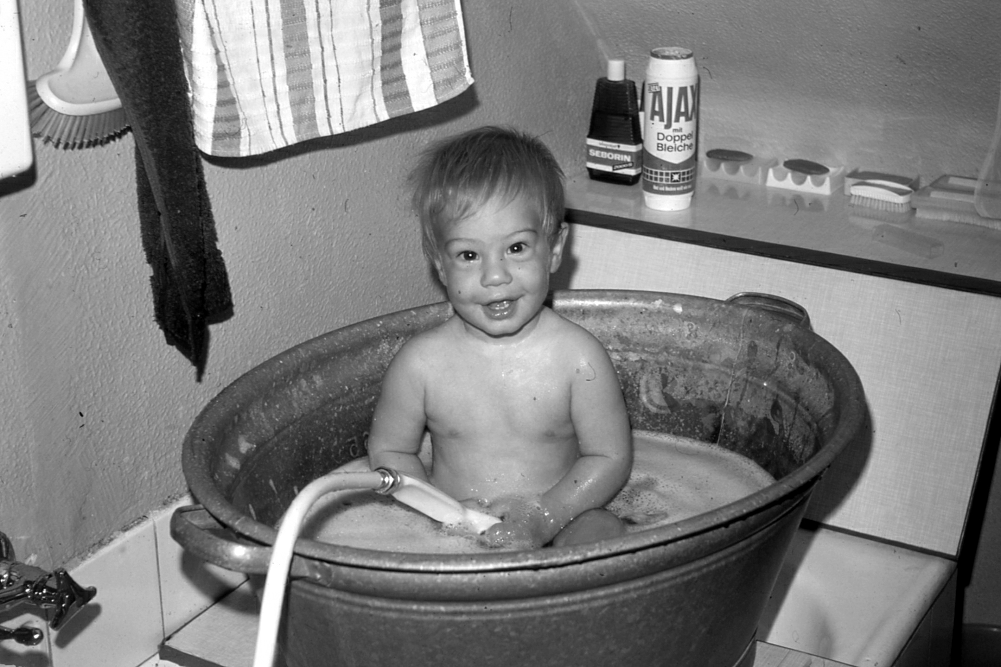 Another Kneipp practice my parents employed was even more dramatic and terrifying.

As a small child my brother had terrible temper tantrums.  He  frequently would fly into such a rage that he almost turned blue in his face screaming.   All measures to calm him down failed until my mother and sister started to resort to another Kneipp therapy.  They would quickly pick up my hysterical  brother and hold his head under running cold water from the tap.   The shock would instantly calm him.  I was very scared watching this cruel procedure.

Like my brother I was also strong willed.  But I did not voice my protests in furor.  I would rather use passive resistance.  During the fall and winter season my mother tried to give us one teaspoon of pure cod liver oil  every day to prevent rickets and other health conditions. I vehemently detested this foul smelling and  even worse tasting liquid.  My mother could neither coax  nor  threaten me into compliance.  I kept my mouth pressed shut.  When all attempts failed to change my mind, my sister would hold me down on the couch, open my mouth forcefully.  In an instant my mother would  pour the disgusting sticky liquid down my throat.  I could not understand why my mother and sister, who loved us so much, could do such horrible  things to us.