In August 1956 our parents sent us to a summer camp in Bergneustadt,  a  beautiful town situated in the forested hills close to Cologne.  We were sponsored by a charitable organization for refugee children from the east.

The prospect of having a real vacation away from home like many of my classmates seemed exciting at first.   But then separation anxiety from my parents took hold of me.  Eventually my mother succeeded in persuading me to go.  My brother didn’t appear to have any mixed feelings and was eager to leave for new adventures.

The big, bright youth hostel was nestled in the forest.  There were lots of children our age, about 10 to 14 years old.   We slept in large dormitories.  It reminded me of the refugee camp in Aurich.  I felt intimidated by the crowds of strange children, especially the boisterous teenage boys.   There were a few bullies who made life miserable for some of us.  They verbally abused us and were physically rough when we played unsupervised games  These boys mercilessly  teased us and gloated when they could see that they had upset or hurt us.  The group  leaders were overwhelmed by the great number of kids in their care,  They often overlooked or did not seem to notice these negative behaviors.  Since  I was extremely shy I did not dare to complain, I suffered silently. 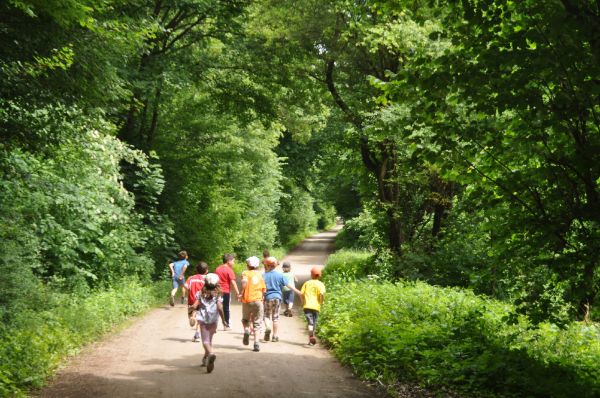 We did some exciting excursions to the Aggertalsperre (dam at the river Agger) and the Atta limestone caves. We  hiked in the beautiful natural surroundings, Nevertheless I felt increasingly homesick.   I couldn’t eat or sleep.  I withdrew even from  girls who were trying to be friends with me. One day, we were all supposed to write a postcard home. I wrote a desperate plea to my parents to come and get me as soon as possible.

A few days later I received a letter from my father.  I eagerly  opened  this welcome  message from home with joyful anticipation.

But what my father wrote to me seemed to top off all the bullying I had endured.

Instead of comforting words my father wrote what he may have thought to be a witty and humorous  “dissertation”. He explained the linguistic origin of the German words ‘dämlich’ and ‘herrlich’,  roughly translated as ‘dumb’ and ‘masterful’.   Unfortunately the allusions and fine points of his linguistic examinations are lost in translation.  There are no equivalents in the English language. He told me that the word “dumb” derives from the word “dame”.  On the other hand “masterful” or “manly” originates from master or man,  ‘Herrlich’  also has the connotation of wonderful or glorious.

I could not finish reading my father’s letter because tears of shame and disappointment blinded my vision.  But miraculously my pain was short lived.  A supervisor approached me and told me that I had a visitor waiting for me in the  main office.  When we entered, there was my beloved mother!  It seemed like a miracle. She had made the long and costly trip by bus and train to see me against my father’s advice.

I was overjoyed.  We spent the beautiful afternoon together walking in the forest and talking.  I unburdened my heart and she listened with empathy.   When evening approached she gave me the choice of going back home with her or staying for the remainder of the vacation.

One thing my father’s letter had accomplished. It had stirred up my pride and courage. I was going to show him that I was not that ‘dumb’  weak ‘dame’  intimidated by the ‘wonderful masters’.  I would not give him the satisfaction of proving his point.  I decided to stay.

I enjoyed the remainder of my time at the youth camp. I learned to ignore verbal assaults and not take them personally. I avoided playing unsupervised games with rough boys  and sought out the company of friendly girls.  I also noticed that the supervisors intervened more readily  when they saw inappropriate behaviors. Maybe as a result of my mother’s visit they were more vigilant.

Summer camp in many respects was a great learning experience for me and it made me stronger. I felt happy and relieved that I did not quit or give in to fears and feelings of insecurity, thanks to  my mother’s love.  In retrospect I also appreciate my father’s words.  Although it was not so obvious,  he also acted out of concern for me.  He knew that by taunting me I would rise to the challenge.   In his words I learned to  ‘master’ my fears.