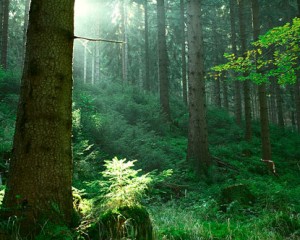 Gotha is a picturesque city located in Thuringia,  one of the most beautiful regions of Germany.  It is called the Green Heart of Germany because of its vast pine and mixed  forests stretching over rolling hills. There are many romantic towns and villages which attracted great poets, composers and other famous artists and philosophers throughout history. 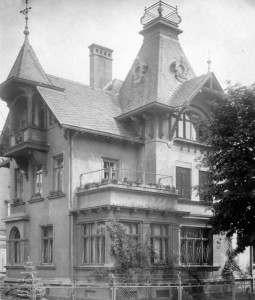 We lived on the main floor of a spacious villa not far from the castle and its amazing park.   It is the biggest landscape park in Germany and contains  many rare and exotic trees.

This wonderful park became our playground.  Every weekend,  through the changing seasons, my father would take us on long walks to this charming place.

Before we even went to school,  he had taught us to identify and name trees, flowers, plants and animals, more than I can name and identify now.  My brother and I  would collect colorful leaves, tasty pine and hazelnuts,  shiny chestnuts, acorns, pine cones, rose hips, and other seeds and berries.  These treasures would delight us more than toys.  We loved to watch the birds, chipmunks, insects, butterflies, frogs, toads, snakes, salamanders and other small animals living in this enchanting realm.  Two big ponds were another exciting attraction to explore.

One day,  my dad came home to report that he had jumped into the main pond in full gear to save a little boy from drowning.

Some of my earliest  memories are holding my dad’s hand and walking in this peaceful and magical place.

After his first few visits home to meet us, my Dad was taken prisoner by the Americans and spent a year in several prison camps.

My mom and my sister had to cope on their own surviving the hard times after the war with two small infants to care for. Food and other resources like fuel, and power were in short supply.

For the entire year of 1945 Gotha was occupied by American troops until the Russians took over the military command in the spring of the following year.

One day when my mom was preparing a meager meal of watery porridge in the kitchen, she noticed a black soldier walking around the back door of our house placing something under the landing of the staircase.

When my terrified mother had summoned up the courage to step outside to question him, he greeted her with a warm smile and pointed under the deck saying in a broad drawl,  “Milk for babies.”

Every day, until the Americans left, my mother and sister would find precious care packages under the landing deposited by this warmhearted  man.  Miraculously  help had come from a most unlikely source, from the enemy!!!

I wish I could still thank this generous soldier who showed us love instead of hatred and helped us survive.

When my dad was finally released from the Americans his ordeals were not over.  As former officer of the German army my dad was no longer allowed under the new Soviet regime to work for the police force in Gotha.

For many weeks after he came home, he was interrogated at odd hours at night about his Nazi past.  My dad had always resisted the Hitler regime and had never joined the infamous SS, even though all higher ranking officers were put under great pressure to do so.  Eventually these torturous investigations were abandoned because no evidence against him was found.

First Attempt to Escape to the West

My brother and I were three years old when my mom made the first attempt to escape with us to the West.

At that time the newly established borders between the divided Germany  were not yet fortified by  fences, ditches and surveillance towers.  There were heavily armed border guards who patrolled the unmarked dividing line between the East and the West.

My mom’s plan was to cross the densely forested border at a remote village with my sister and us two,

Once safely across my sister would take us by train to relatives in the West while my mother would return home to escape with my Dad via Berlin to the West to rejoin us later.  At that time the wall had not yet been built and it was still possible to escape from the eastern part of the city to the West by the subway system which still joined the two parts of Berlin.

The memories of that night are etched in my memory forever.  My mom and my sister were struggling to push our twin stroller over a rugged forest path at the approach of night.  When the going was getting too rough my mother allowed us to walk a short distance ahead of them.  Tired of being cooped up in the stroller for too long my brother and I started to run and chase each other around a bend of the narrow path when a gigantic figure with a gun stepped out of the dense bush and blocked our way. 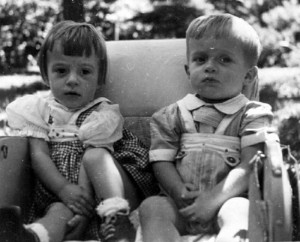 We all stood motionless for a long moment until my mother and sister came around the path.   My sister started to scream with fright but my mother stayed calm.  She tried to explain that we lost our way but the guard was not fooled.

He told my mother that he would walk the other way pretending he never met us, on condition that she immediately returned to the village.  If she refused to comply, he would have to shoot as were his strict orders.  If he showed mercy, his own life was at stake.

He did show some pity though by giving my mother directions to a house where the porch door was unlocked so we could spend the night under cover.   “There will be shooting tonight”, were his last words.  Once again we experienced the  unexpected mercy of an enemy soldier.

We spent the night huddled in the corner of a spacious porch.  My sister broke down crying hysterically,  We had never heard her cry before and it scared us more than the sounds of shots fired in the distance.

Part of the reason for my sister’s breakdown was that still unknown to her she experienced the first stages of pregnancy.

A few months later, she married her long time boyfriend and soon after our first nephew was born.  Thus, my brother and I became uncle and aunt at he tender age of four. 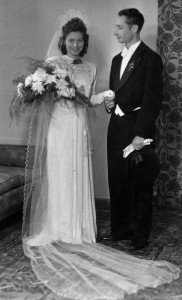