Happy to be finally reunited with our beloved parents we had to say good bye to our new friends in Dortmund.

Our parents told us that we would not go back home to Gotha for a long, long time until the two separated Germanys would be reunited again.

First we would have to live in a refugee camp for some time until we would hopefully find a new home in the Rhineland region where my mother was born.  After the destruction caused by the war and the rapid immigration of refugees from the East housing was in short supply.   There was a construction frenzy all over West Germany to keep up with the urgent demand for housing.  People had to live in temporary shelters often for a long period of time.

We were assigned to live in a refugee camp in Lower Saxony.  Abandoned military barracks were converted into a refuge camp in Sandhorst, a small community close to Aurich, a quaint small town. This camp could house thousands of refugees. 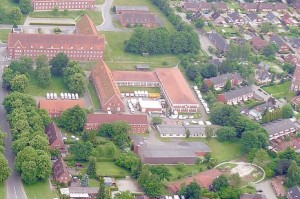 The buildings looked bright  and clean.  They were surrounded by lots of green spaces.  There were meadows and lush pastures stretching to the endless horizon on this flat landscape. 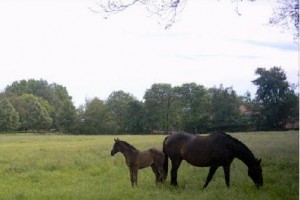 We were assigned to a room with six bunk beds.  Three other families shared the room with us. From our dormitory a door led to another room about the same size.  Occupants of that adjacent room shared our door to the hallway.  Thus there was a lot of traffic through our room and there was little privacy.

We were told that we should  avoid close contact with the people in the neighboring room because they had a very contagious disease. I noticed that my mother looked quite shocked when she heard that. My brother and I, however, were very excited  with the prospect of sleeping  on the upper bunk beds

After we stored our small suitcases under our beds, the camp attendant led us to a big hall lined with multiple long racks of clothing in all sizes.  They were donated by American charities and other organizations and people from all over the world. We were invited to pick some clothing we needed and liked.  That was exciting for me, because I had never had the opportunity to chose a dress on my own.  I had always worn hand-me-downs sent from my mom’s distant relatives.

I picked a dress, which the attending lady told us was donated by a family from South Africa. I loved the dress and imagined a girl like me having worn it in a far away place.

The kind lady invited us to pose in our newly chosen clothes for a photo out on the lawn in the mild spring air. We all looked happy on this rare family picture, the first one  in the “Golden West”.