When my twin brother and I were at the end of grade 4,  my parents  had to decide if they wanted us to go on to high school. After successfully concluding grade 13, we would obtain the senior matriculation certificate, Abitur in German, which was a prerequisite for post secondary education at a university.

Only a small percentage of students would enter high school.  Your elementary teacher had to recommend you based on your performance and you had to pass a stringent entrance exam.  While all children by law received eight years of free  elementary school education,  high school students had to pay tuition fees and finance their books and  other educational materials.  It was an honor and a privilege to attend high school.  You belonged to an elite group if you passed your senior matriculation.  Only about half the number of students that started high school would accomplish that  hard to achieve goal.

There were scholarships for top students who had financial difficulties to pay the tuition fees.  My twin brother and I, plus my best friend Gisela,  were the lucky recipients after successfully completing  grade 4 with top marks.

For the first time in our life,  my twin brother and I would attend different schools.  The two high schools in Velbert were segregated by gender and academic orientation.  I went to the  modern language branch for girls and my brother to the science and ancient language branch for boys.  While the school buildings were in close proximity,  we had no contact with students of the opposite sex for our entire high school life except for a short extra curricular ballroom dancing course in grade 10.

While our school had a high percentage of male teachers, my brother only once,  for a short time,  had a female teacher teaching at his school.  That was “sensational” for the boys and she enjoyed a special status.  The boys “adored” her like a queen. 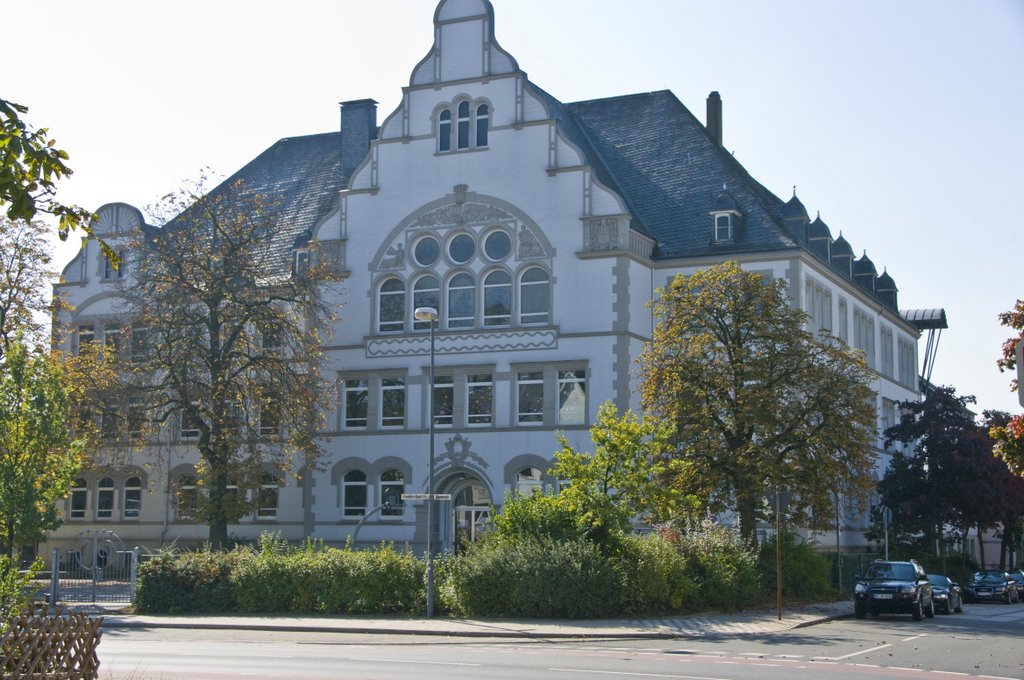 This is the beloved school I attended for nine years.  Over the entrance was a stained glass window which read “Non scholae sed vitae.” I hardly ever missed a day and was always eager to go and learn for life.

We started out with 45 girls in grade 5 and after nine years only 15 of us graduated. Our homeroom teacher  was called Mr. Meckenstock.  He mentored us for the entire  school time.  We fondly nicknamed him  Mecki after the beloved little stuffed hedgehog toy of our generation.

Mecki did only faintly resemble the little toy because he had lost most of his hair.   Although he was very strict (like almost all German teachers),  he was also kind and warmhearted.   Above all, he was a unique character full of contradictions, He taught us English and French with lots of enthusiasm. He was proficient in both languages, even though he had never studied them in the native country.  In fact, he had never been abroad, until we went on a field trip to Paris with him in grade 11.  The comical adventures of that memorable trip I will never forget.  But I will talk about them in detail later.

Mecki laid great stress on oral participation in classroom discussions which I really liked.  I enjoyed sharing thoughts and opinions on ideas or books we had to read eventually in English and French.

Our math teacher, nicknamed Ata (father), was also popular, This  short,  round, red-cheeked jovial man was a wizard with numbers.   Every math lesson he magically turned into a fun experience by engaging us in group math competitions at the  blackboard.  He really cared that we understood and freely helped us when we had problems.  We tried very hard not to disappoint him.

These two outstanding teachers probably had the greatest influence on my academic achievement.  I will talk more about other teachers in the near future,

Teachers at my time were highly respected.  When they entered the classroom, we had to rise and greet them in unison.  Whenever we volunteered an answer, we also had to stand up.  In their presence we had to act and speak politely and respectfully.  But life is full of paradoxes.  We girls were not as docile and disciplined as was expected.

Before concluding this post,  one more afterthought on our school building.  As I mentioned, the boy’s high school was adjacent to ours.  The schools were so close that we had to cross the boys school yard to go down some rock steps to our own yard.

We were not allowed to talk or interact with the boys when walking to our yard below.   The boys would stand at the retaining wall and look down on us.  Maybe that reflected an attitude symbolic for that time.